Have you ever thought that an Industrial Plant Monitoring System would fit into a suit case? Measuring heat, weight, vibration and light and operate cooling and lighting systems in less than 50 litres of space? We faced the challenge and built a compact and portable IoT demo running ubiworx™.

Due to its compact form factor the demo has already travelled the world, we have showed the Industrial Plant Monitoring demo at events in: Nurnberg - Germany, Rome - Italy and San Francisco - USA.

Building and wiring the suitcase is pretty straight forward as soon as you get your hands on all the parts. The demo consists of:

The biggest challenge might be to get the perspex cut. The best way to do this is to draw a schematic with the tool of your choice and order them from a company that offers laser cutting services. Many thanks here to FabLab in Limerick, Ireland! 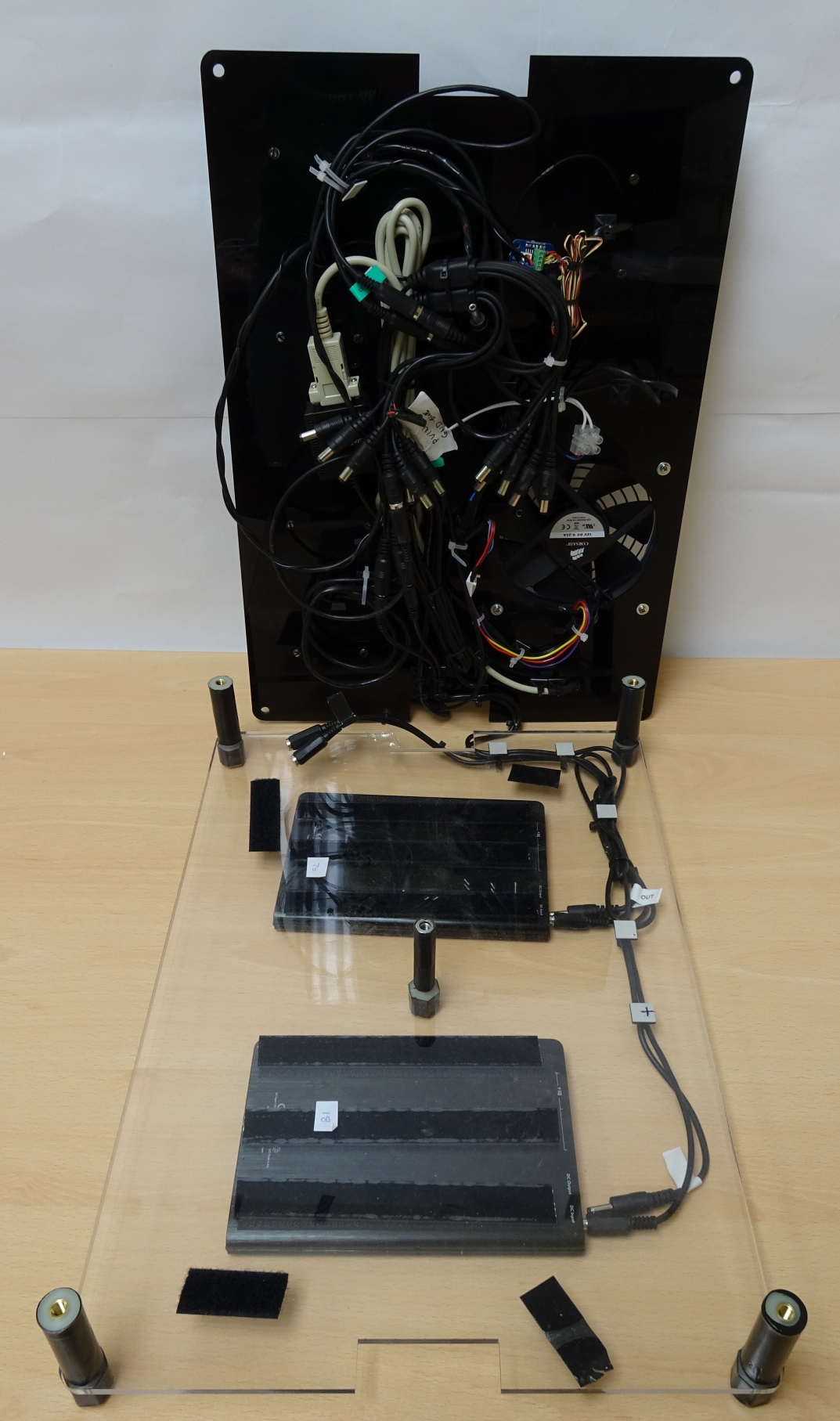 After getting the perspex cut it's just a matter of wiring the sensors and there are plenty of tutorials on the web on how to do this. Use wire straps or tape to tie your cables together, otherwise it will get pretty messy.

Our LED and fan require a 12V power supply which is why we cut 2 ends of the cable splitter and connected those components to the splitter. To switch the LED on and off use either an opto-coupler, mosfet or transistor.

The boards are running ubiworx™ in any publically available version greater than 0.8.2. The sensors are natively supported by ubiworx™ since day 1. To prevent life from being harder than it has to be, the Intel Edisons run ubilinux, a debian based system. This makes installing ubiworx™, helpful tools and dependencies very easy and straight forward.

The setup on the left side of the demo simulates a warehouse. It consists of an ambient light sensor, a LED and a weight scale. 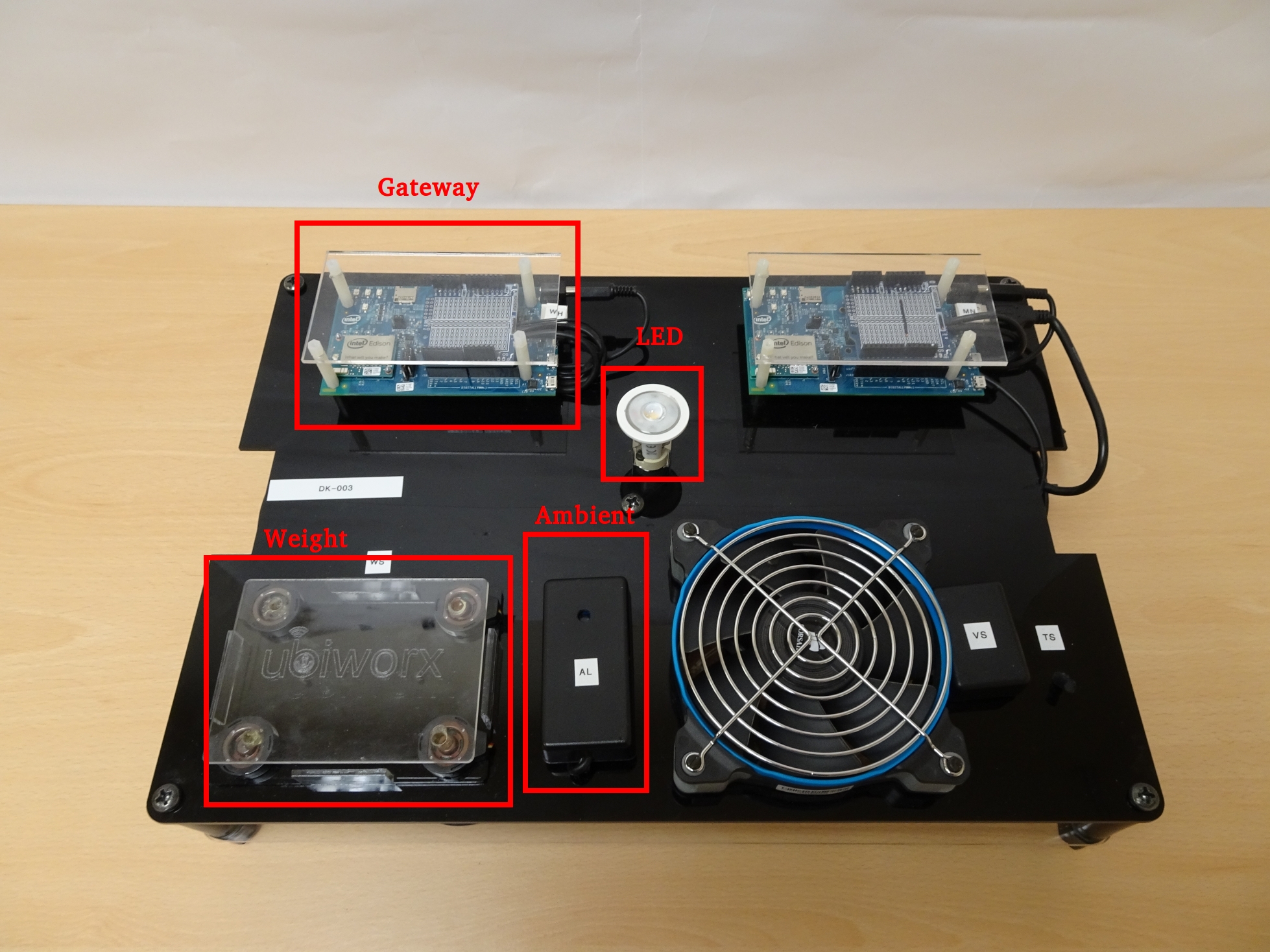 The gateway monitors the light intensity in its environment and turns on the lights whenever it becomes too dark. Since the ambient light sensor is also a proximity sensor, it can also be used to detect e.g. bypassing objects and count them, e.g. items arriving and leaving the warehouse. 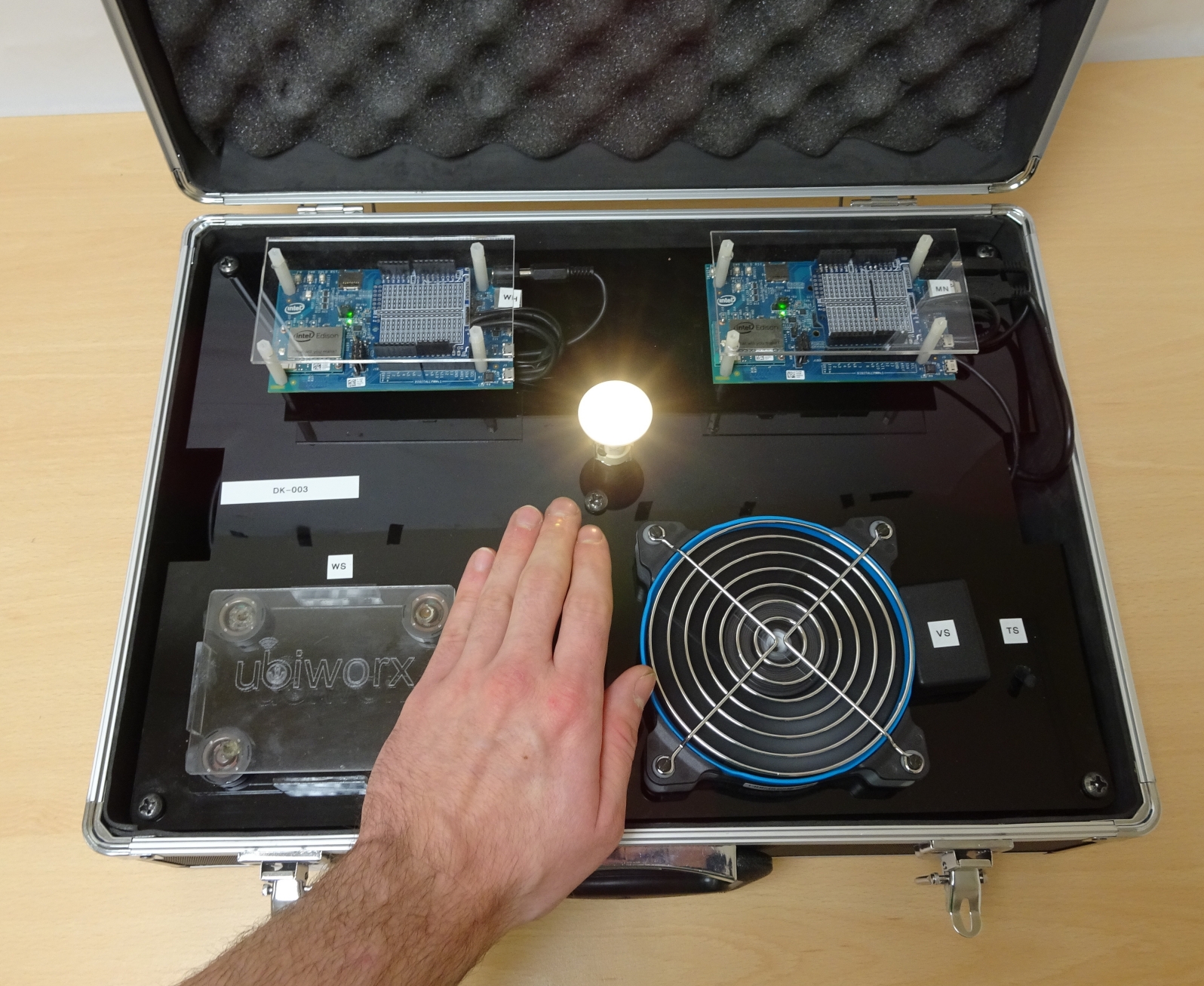 Using the weight scale, the gateway can monitor the weight of incoming and outgoing items and emit warnings about unexpected or exceeding weights. It can flash alarm lights and send emails and text messages. 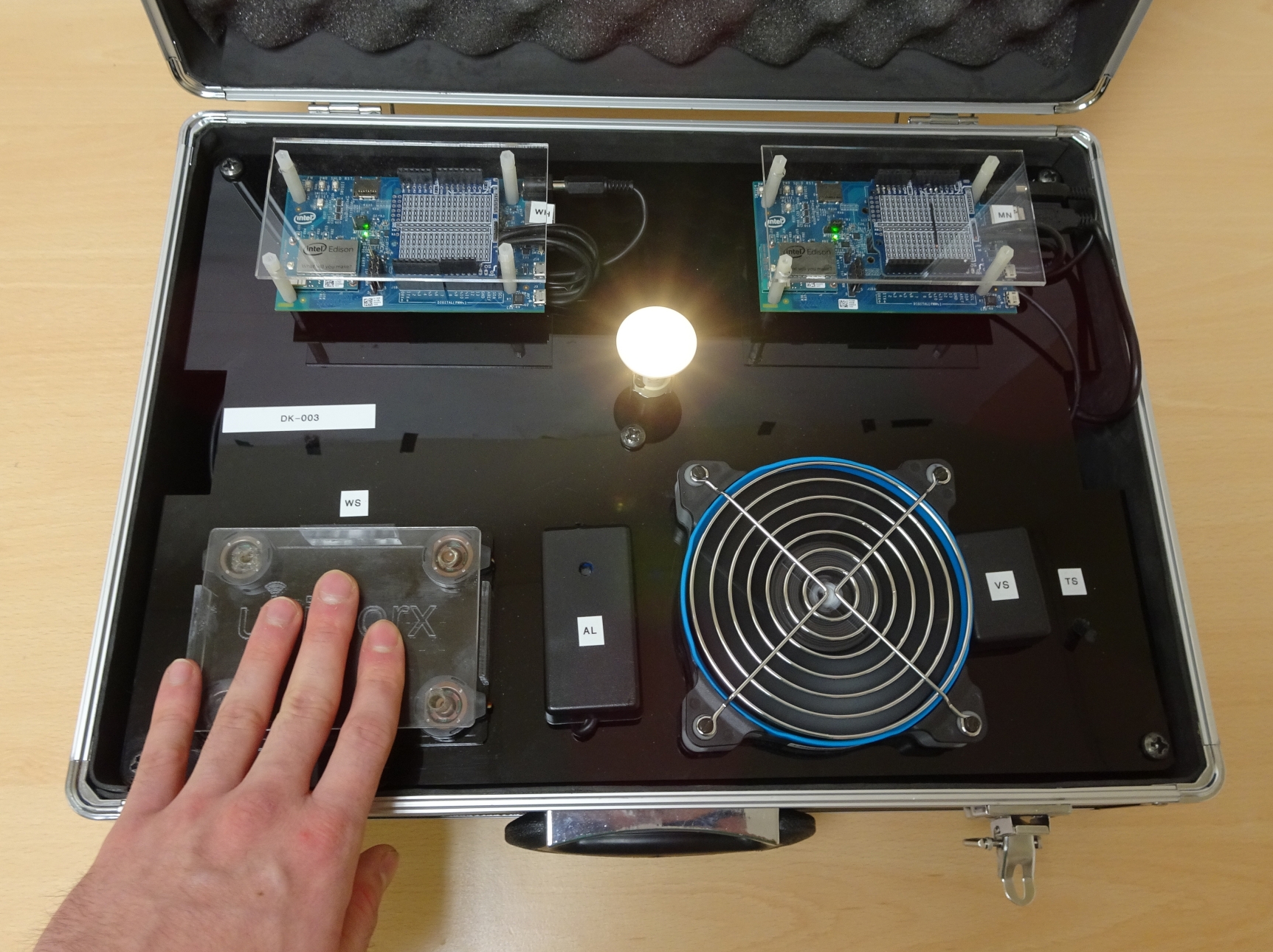 A manufacturing monitoring application sits on the other side of the perspex. It contains a PWM controllable fan, a vibration sensor and a temperature sensor. 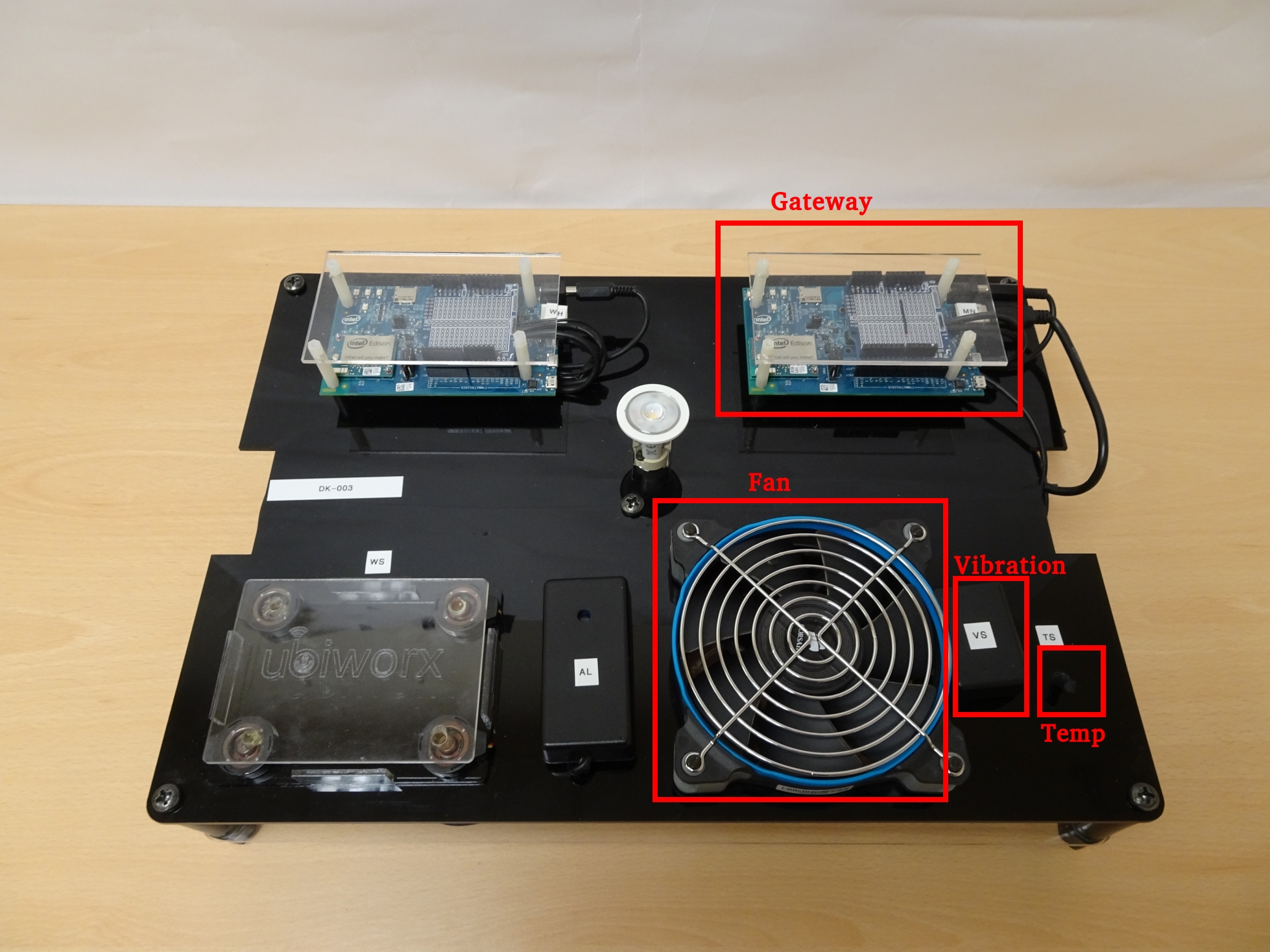 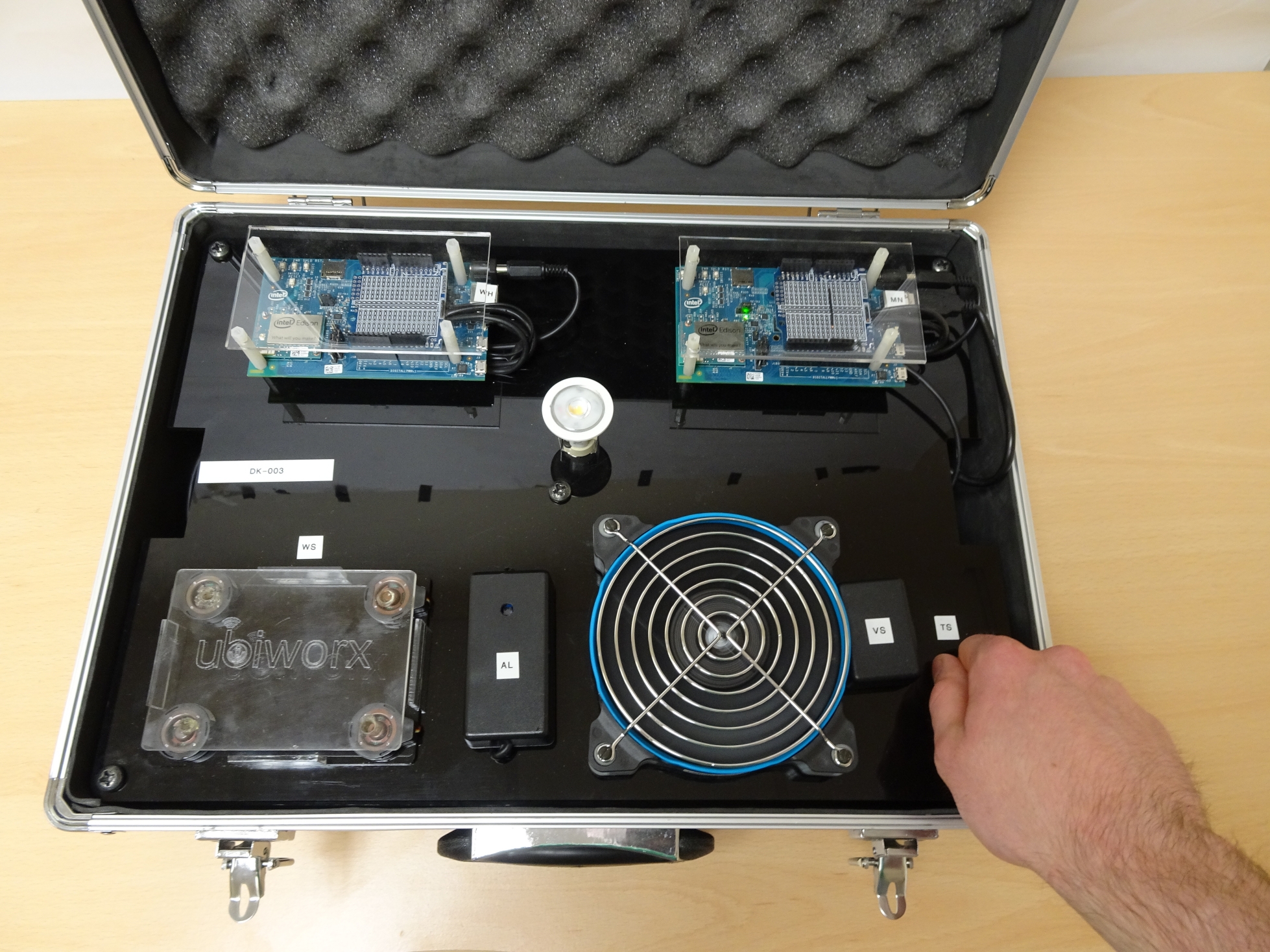 The accelerometer measures the vibration of the cooling system and slows down the fan if it vibrates too much to avoid physical damage.

ubiworx™ supports a feature called local logic that enables intelligence to be run on the gateway itself and utilize its processing power and low latency to sensors and actuators. It was used to create the behavior described in the previous sections. By using the simple drag and drop interface complex logic can be created.

This screenshot shows the logic of the warehouse gateway and reflects its behaviour whenever a weight is exceeded or the environment gets too dark.

Here you can see the schematic of the manufacturing gateway that checks for high temperature and strong vibration.

The challenge is achieved and a full blown industrial monitoring demo packed into a small suit case can travel the world. Using ubiworx™ the suit case is instantly connected to the cloud and executes local logic to enable smart and responsive applications even if the gateways are disconnected from the internet.